Why 47,000 grocery workers in California may go on strike

Some 47,000 supermarket workers at Ralphs, Albertsons and other grocery chains in southern California are closer to starting the largest private-sector strike since 74,000 General Motors employees walked off the job in 2007.

Here’s what’s happening in California: Union officials representing cashiers, stockers and clerks at Ralphs — owned by Kroger— and employees at Albertsons and its Vons and Pavilion chains have been negotiating new three-year contracts with the companies since their contracts expired in March.

California workers at more than 500 stores are demanding higher pay and a contract that protects their retirement and health benefits.

Talks between the companies and union leaders representing more than 500 stores in the region are ongoing. But some Ralphs workers in recent weeks have started to protest outside local stores to raise pressure on the company.

Next week, workers represented by the United Food and Commercial Workers will begin voting on whether to approve Kroger and Albertsons’ latest contract proposals. If workers reject the contracts, they will then vote on whether to authorize a strike. Workers approved a strike after a previous contract was voted down in June.

This would not be the first strike by California grocery workers. In 2003, more than 70,000 workers at 859 stores in the state walked picket lines for nearly five months.

“They need to open up a little bit and give us a little bit more piece of that pie that we deserve because we’re the ones in the trenches doing all the work,” said Jaime Escarcega, a Ralphs cashier in Riverside, California, who has worked at the chain for 14 years. “We feel like we’re coming up short.” 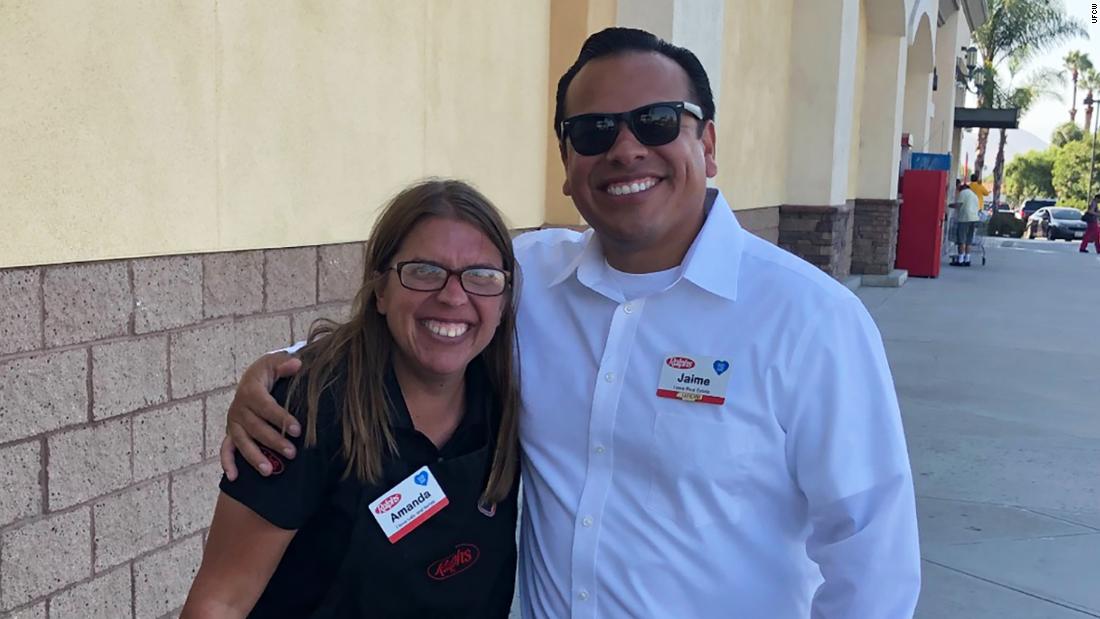 Jaime Escarcega (right), a Ralphs cashier in Riverside, California, has worked at the chain for 14 years.

He makes $21 an hour, but his wages have not risen in five years. He hopes a new contract will help him and his co-workers keep pace with California’s cost of living increases. Prices in California are rising nearly twice as fast as the rest of the country, according to the Labor Department.

“We’re on the front lines. We work in the stores. We’re pulling in the money,” Escarcega said. “We’re not being taken care of so that’s why we’re here.”

Escarcega said that going on a strike would be a “last resort” for employees, but that “everybody wants to speak up and get what we deserve.”

Grocery workers often have more leverage in negotiations with employers than other retail workers because groceries are perishable and companies can ill-afford work slowdowns, experts say.

A spokesperson for Ralphs said the company’s contract proposal would invest an additional $108 million toward increased wages, health care and pension benefits, a significant improvement over most Fortune 500 companies and non-union grocers.

Albertsons, Vons and Pavilions “remain committed” to reaching an agreement with workers that “includes good wages, maintains their affordable health care and provides for their retirement,” a spokesperson for Albertsons said.

A grocery workers’ strike in California would come at a moment when a growing number of Americans are walking off the job. About 485,000 workers were involved in major work stoppages last year, the highest number since 1986, according to the Labor Department.

Worker action in California would also come as support for unions in the United States nears a 50-year high, according to recent Gallup polling.

More workers are pressing their employers because of concerns about income inequality, wage stagnation, sexual harassment in the workplace and automation. 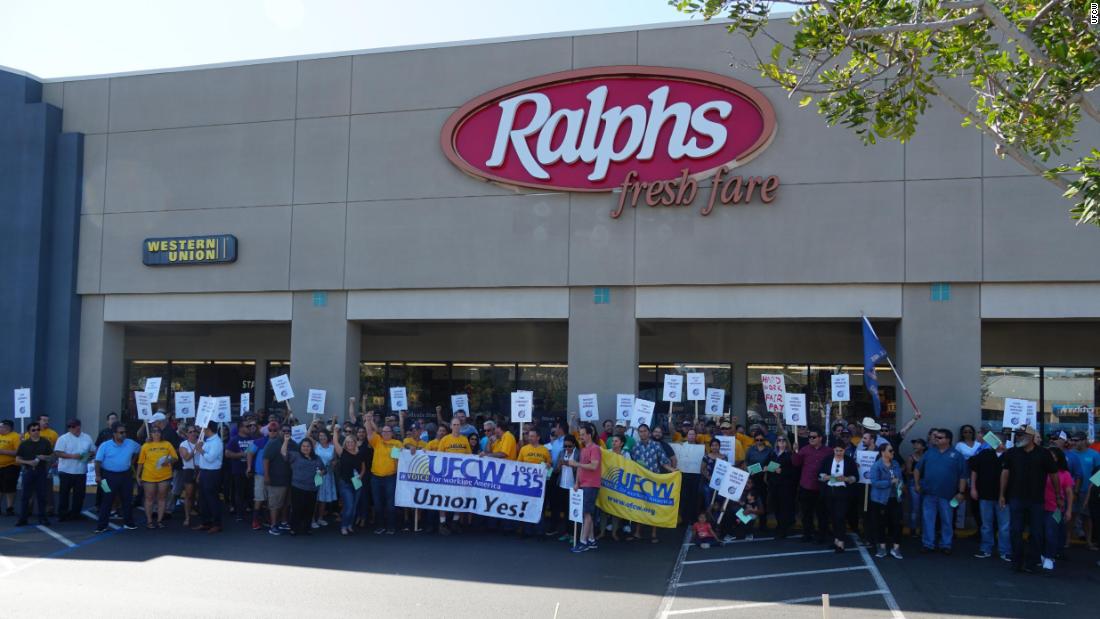 Ralphs supermarket workers in California protested outside local stores recently to raise pressure on the company in contract negotiations.

That same sentiment is driving new activism among grocery employees, according to Thomas Kochan, director of the MIT Sloan Institute for Work and Employment Research.

A California strike would be the second major work stoppage in the grocery industry this year. In April, 31,000 Stop & Shop workers at 240 stores in New England walked off their jobs for 10 days.

California unions are emboldened by the Stop & Shop strike, high-profile teachers’ strikes around the country and the possibility of attracting Democratic candidates’ support, said Steven Greenhouse, a former labor reporter at The New York Times and the author of “Beaten Down, Worked Up: The Past, Present & Future of American Labor.”

“Labor was fairly dead in the water three, four, five years ago. Then, boom, suddenly these huge teacher strikes in West Virginia, Oklahoma and Arizona,” he said. “Successful strikes beget other strikes.”

A grocery strike in California would be a rare work stoppage in retail.

Only 4.5% of America’s retail workers belonged to a union in 2018, according to the Department of Labor. The rate is below the 6.4% union membership rate for private-sector workers.

Walmart has more than 1.5 million US employees and Target has 360,000 workers. None of them are unionized. Walmart, born in Arkansas during the 1960s, fought hard to prevent unions from organizing workers as it swept across America.

“Big-box stores were predicated on being low paid, non-union, and hostile to unionized department stores,” said Nelson Lichtenstein, a labor historian at the University of California, Santa Barbara. “When they expanded into groceries, they kept their anti-union posture, made easy by shifts in law and politics in the late 20th century.”

Organizing workers in retail — an industry defined by high turnover rates and part-time employees — has been difficult for unions.

“When you have a lot of part-time workers who don’t know their rights, who are kind of precarious workers worried that they might get laid off if they support a union, it’s hard,” said Greenhouse, the former labor reporter.

Grocery workers are an exception, however. The majority of Kroger’s approximately 453,000 employees belong to unions, while 63% of Albertsons 267,000 workers are union members, according to filings.

Supermarket workers, especially butchers, organized in the early and mid-20th century before the rise of big-box stores, according to labor experts.

Grocery operators historically operate at low profit margins, and grocers like Kroger and Albertsons face higher costs than non-union discount retailers. Grocers are also getting squeezed by the rise of low-cost union-free competitors such as Aldi and Dollar General.

Developments in California may have ramifications for other grocery stores, too.

Some 20,000 employees at Fred Meyer, Albertsons and Safeway in Oregon and Washington represented by the United Food and Commercial Workers recently voted to authorize a strike.