ACSI’s latest Retail and Consumer Shipping Report, which is based on interviews with 62,486 customers throughout 2018, was released this morning and shows the combined categories’ scores fell 0.9 percent to a score of 77.4 percent on a scale of 0 to 100. The supermarket category fell 1.3 percent to a score of 78. It is interesting to note that the scores for both the Food Manufacturing and Soft Drinks industries are 82.

David VanAmburg, Managing Director at the ACSI said in a press release that “Historically, the ACSI has found that the more service typically required for a given industry, the lower the customer satisfaction, and it rings true for retailers this year. Things like courtesy and helpfulness of store staff, call center support, and even availability of merchandise on the shelves all have a service element and have seen drops from a year ago.” 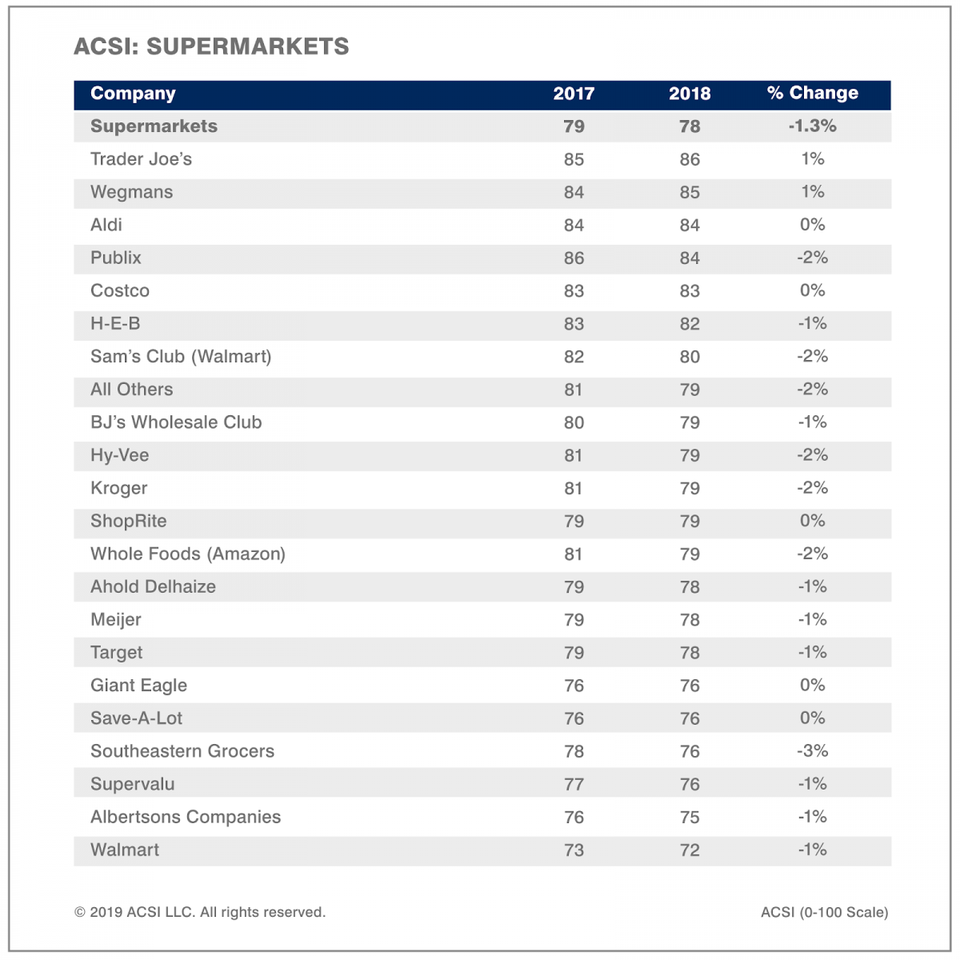 Specific to the supermarket category, Trader Joe’s is ranked as number one increasing its score by 1 percent to 86, making it the number one retailer among all six categories, unseating Amazon. Wegmans comes in at number two with a score of 85 and Aldi’s score remains unchanged from 2017 at 84 giving it the number 3 rank two years in a row. Aldi, who has publicly announced their desire to be the number three food retailer in the US and is embarking on an aggressive expansion in new more upscale geographies, is remodeling stores and expanding key departments including fresh produce and organics is the retailer to watch in next year’s report as it attracts new shoppers to its unique grocery format. Kroger, the second largest food retailer fell 2 percent to a score of 79. Walmart the nation’s largest food retailer is ranked last again this year according to the report, falling another 1 percent to a score of 72.

According to ACSI, Whole Foods acquisition by Amazon “does not appear to have boosted the company in the eyes of its customers as satisfaction sinks 2% to 79.” What will be interesting to watch is next year’s ACSI report ranking as Whole Foods embarks on a vigorous store expansion program entering new areas of the country and tries to steal shoppers from more traditional grocers.

In all categories that ACSI records in their Customer Experience Benchmarks, all but one – “convenience of store location and hours” (which is ranked as the highest experience) dropped by at least one point over the 2017 ratings. For the 2018 report they have added two new benchmarks: quality of mobile app and reliability of mobile app (both receiving scores of 82 – tying for the number two highest-ranking experiences in supermarkets. Reinforcing the emerging preference of using mobile devices to shop for food. 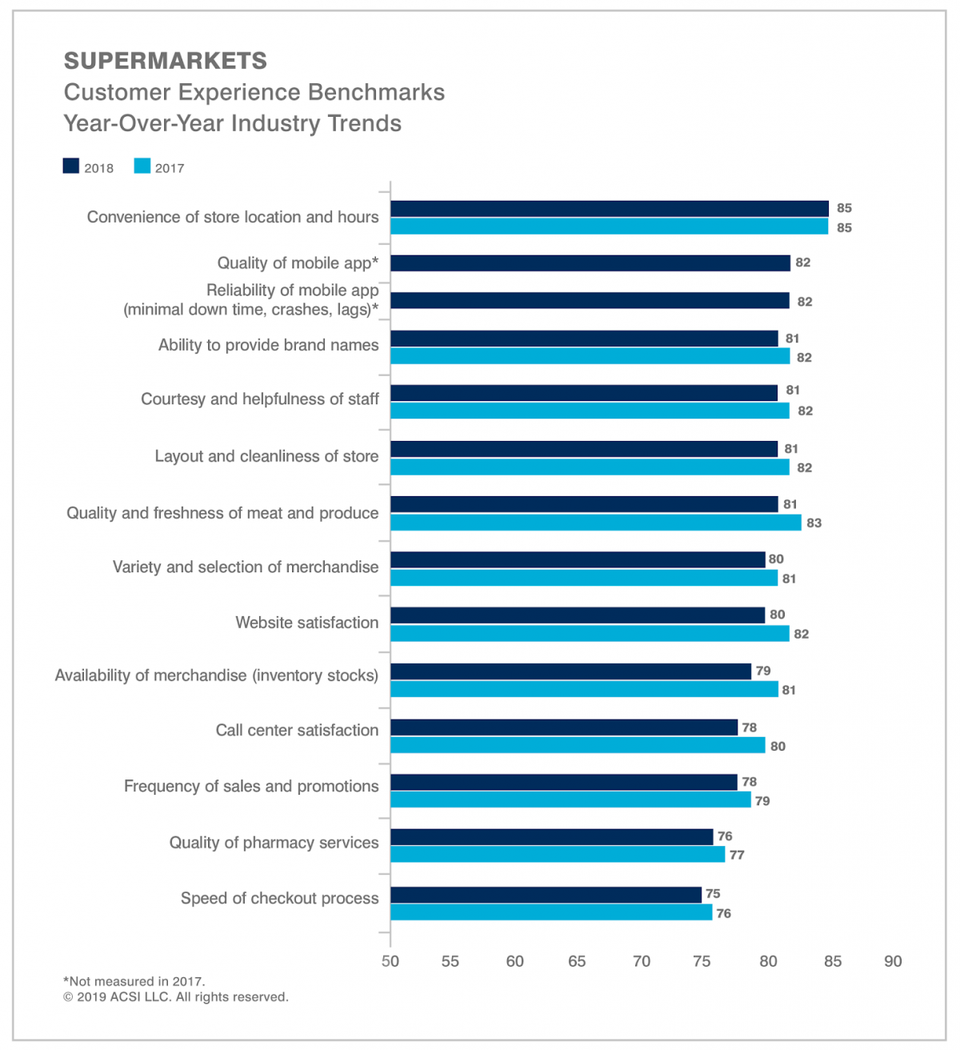 There are some notable surprises in the supermarket benchmarks. The ability to supply brand names, the layout and cleanliness of the store and frequency of sales and promotions each fell 1 point. Website satisfaction fell 2 points to a score of 80; further underscoring the satisfaction of shoppers using their mobile devices.

As shoppers, especially Millenials and Gen Z continue to show their interest (and love?) for all things food, it is shocking to find that the quality and freshness of meat and produce benchmark dropped 2 points to 81. Similarly, the variety and selection of merchandise also dropped, albeit by only 1 point, to a score of 80.

With all these benchmark scores dropping, is there any reason why to question that Internet retail is the favorite category?

The ACSI report should be a wake up call to all retailers, not just to supermarkets, that shoppers have more choice than ever before and that they will seek out those choices when they are not satisfied. The point of difference for brick and mortar stores, that is pronounced repeatedly, is that the most important tool they have to compete is to offer a more personal relationship and experience. So why do we see a falling in benchmarks for courtesy and helpfulness of staff and call center satisfaction in supermarkets? Are they just not listening?