The seven UFCW locals represent some 46,000 grocery workers, who have worked under a contract extension since the original three-year agreement lapsed on March 3. According to the UFCW locals, the retailers have proposed below-cost-of-living wage hikes of less than 1% and a 25% reduction of cashier wages, and workers are concerned about funding for the health care plan.

Late yesterday, Los Angeles-based Ralphs, part of The Kroger Co., said it aims to re-engage with the unions “for meaningful and thoughtful discussions” and to “come to a fair and balanced offer that benefits all 18,000 associates who choose to work for Ralphs.”

Ralphs operates 190 stores in the region. The retailer said it has a track record of offering competitive wages and benefits. Regarding the latter, the company noted that it provides “generous” pension benefits at a time when 93% of U.S. companies don’t offer a pension option, while its medical coverage costs associates an average of $62 per month in premiums for their family.

“As we have said all along, we are committed to continuing to invest in our associates — providing secure, stable jobs with competitive pay and benefits,” Ralphs President Mike Murphy said in a statement. “We know our associates are the heart of our company. With a balanced approach, this agreement can be a win for everyone — our associates, our communities and our company.” 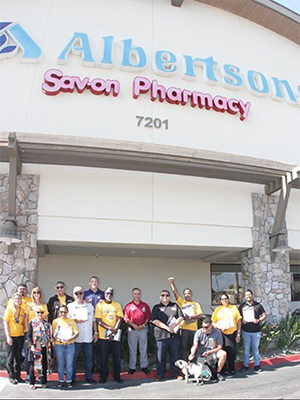 In Southern California, Albertsons Cos. operates 342 stores under the Albertsons, Vons and Pavilions banners and has 29,000 unionized workers, according to the Los Angeles Times. The Boise, Idaho-based supermarket retailer has said it remains focused on productive talks with the unions.

“We remain committed to negotiating a contract that is fair to all parties, including our employees, and will continue to work to achieve that,” Albertsons Cos. commented after the UFCW locals’ strike authorization votes last month.

During the past week, UFCW locals in Southern California — such as UFCW 770, 1428 and 324 — have staged rallies at Ralphs, Vons and Pavilions stores and urged customers not to shop there. UFCW 1428 said it plans to hold another rally today at the Vons on 777 Glendora Ave. in West Covina, Calif.

Similarly, a July 8 tweet by UFCW 324 read, “Two hours is all we asked for. We were at Ralphs in Garden Grove and Pavilions in Long Beach July 3 urging customers to boycott the two stores from 3 to 5 p.m. as a show of support for us in our contract fight. The 500-plus petitions signed that day show whose side customers are on.” 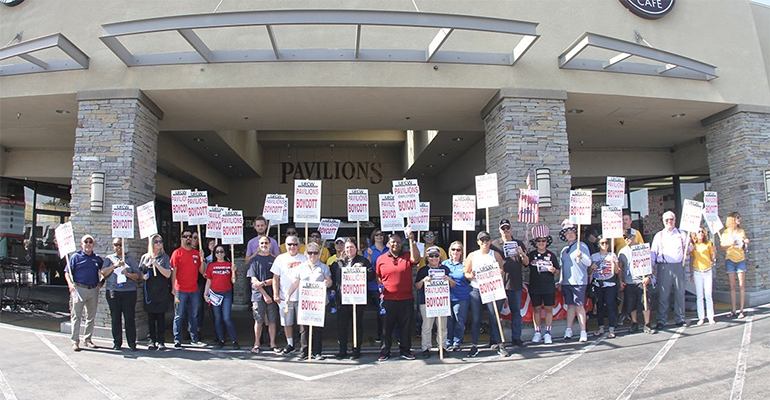 Unions representing workers in the region have raised the pressure on the grocery chains to come to an agreement. On Monday, Teamsters Joint Council 42 in Los Angeles said its membership voted to boycott the Ralphs, Albertsons, Vons and Pavilions stores if the UFCW locals go on strike. Teamsters Joint Council 42 represents over 158,800 workers at 23 Teamster locals in Southern California, Southern Nevada, Guam, Saipan and Hawaii.

“We will always stand with our UFCW brothers and sisters in their fight for fair wages, affordable health care and retirement security,” said Ron Herrera, Teamsters International vice president for the western region, recording secretary of Teamsters Joint Council 42 and secretary-treasurer of Teamsters Local 396 in Covina, Calif. “The labor movement in California has a long history of uniting against injustice, and our members are prepared to honor any picket lines that UFCW may raise if they go on strike.”

Teamsters Joint Council 42 noted that the UFCW locals in Central and Southern California are bargaining for better wages and to safeguard their health and retirement benefits. “Our members stand ready to support the UFCW in their fight,” according to Steve Vairma, Teamsters International vice president at-large and director of the Teamsters warehouse division. “We cannot allow corporations to further erode the workers’ rights, wages and benefits that we, as the labor movement, have fought so hard to win.”

On July 1, the Los Angeles Federation of Labor also had voted to support Southern California grocery store employees in the event of a strike. As a result, the federation’s union members — about 800,000 workers in Los Angeles County — would refuse to cross picket lines at the Ralphs, Vons and Albertsons stores if the UFCW do strike.