Mountain View, Calif.-based Google said yesterday it has partnered with Safeway and Target to simplify the task of finding grocery and other specials using the Google Pay app. Customers can find deals on thousands of items at more than 500 Safeway stores as well as at all Target stores nationwide.

To find the latest grocery deals, users search for Safeway or Target in the Google Pay app and tap on “View Weekly Deals.” With location functionality activated in Google Pay, the app then will list weekly deals at Safeway and Target when shoppers are near their stores. 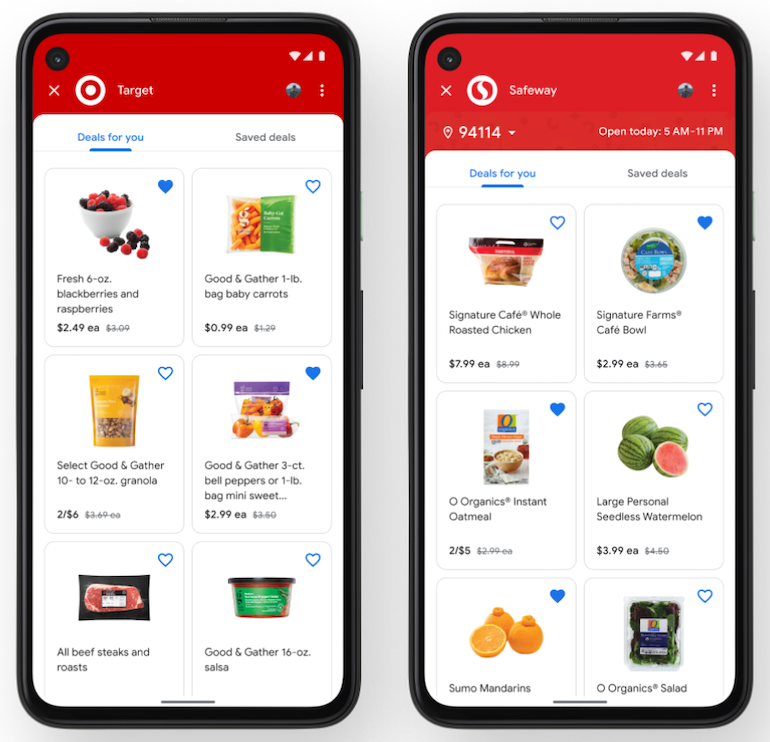 For Safeway and Target shoppers, the Google Pay functionality will eliminate the task of having to search for and collect grocery coupons.

Google Pay also has expanded capabilitiesfor budgeting by tracking monthly spending by category as well as for transit by being accepted as a payment form for tickets in more cities, the online technology giant said.

“Last year, we launched a reimagined Google Pay to be a safe, simple and helpful way to pay and manage your finances. The app is full of ways to pay friends and businesses, save with offers and rewards and stay on top of your money,” Josh Woodward, director of product management at Google, wrote in a blog post on Thursday. “Today, we are announcing three ways to help you save money on groceries, pay for transit fares in more cities and better understand your spending.”

“Small expenses add up, but finding ways to save on everyday items like groceries is one way to keep your budget in check. However, it can be a cumbersome task,” he explained. “Taking the time to look through coupons, finding the right offer, remembering to bring them with you or tracking down that promo code you saw online (where was it again?) can be tedious. We teamed up with Safeway to make it easy to find weekly grocery deals from the Google Pay app.”

For Safeway, the enhancement stems from Boise, Idaho-based Albertsons’ sweeping partnership with Google to create a more engaging, convenient shopping experience. Under the collaboration, announced last month, Albertsons has been working with Google teams on a range of in-store and online shopping solutions, such as integrating Google Search and Maps to help shoppers locate products, streamlining the checkout process with Google Pay, and leveraging Google Cloud artificial intelligence technologies such as Vision AI, Recommendations AI and Business Messages into operations to build a predictive grocery engine.

Google also has teamed with Instacart to provide more shopping information via Google Search, such as delivery providers, pickup and delivery windows, fees and order minimums. And this summer, Google also is slated to work with The Kroger Co.’s Fred Meyer chain to facilitate grocery pickup.

Under the planned pilot at selected Fred Meyer stores in Portland, Ore., customers making a pickup order via the retailer’s app can add it to Google Maps. They will then receive an alert when to head to the store and upon arrival can notify the store. Google said the estimated arrival time is continuously updated, based on location and traffic, enabling store associates to have orders ready as soon as customers arrive. Orders can then be brought out to customers’ vehicles after the check in on the Maps app, providing a contactless pickup experience.

Walmart also has collaborated with Google on ways to enhance the shopping experience, including a service called Walmart Voice Order that allows customers to order groceries by voice on any device that works with the Google Assistant. Walmart Voice Order stems from a partnership that Walmart and Google announced in August 2017 to enable customers to use Google apps and devices to shop at Walmart.