The 11-day strike at Stop & Shop stores in New England could impact the supermarket chain’s operating profit by more than $100 million.

Overall, Zaandam, Netherlands-based Ahold Delhaize now expects underlying operating margin to be slightly lower in 2019 than in 2018 following the strike. The global food retailer also lowered the percentage growth of underlying earnings per share for 2019 from high single digits to low single digits.

Ahold Delhaize said it expects its free cash flow to be unchanged, at about €1.8 billion ($2.02 billion U.S.) for full-year 2019, “due to the continued business strength of our other U.S. and European brands.” The company added that first-quarter 2019 results, to be reported May 8, won’t be affected by the strike and remain in line with expectations. 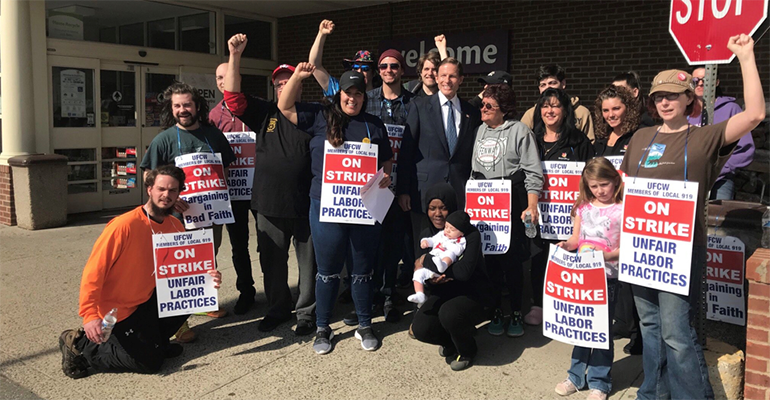 Sen. Richard Blumental (D., Conn.) was among the many public officials standing with Stop & Shop workers during the strike.

More than 31,000 workers from 246 Stop & Shop stores in Massachusetts, Connecticut and Rhode Island walked off the job on April 11 after their contract expired Feb. 23 following weeks of negotiations since January. Stop & Shop and United Food & Commercial Workers (UFCW) union locals 1445, 1459, 919, 371 and 328 continued negotiations during the strike and reached a new contract agreement Sunday evening. Employees returned to work Monday morning.

“I am pleased that Stop & Shop’s management and the five local unions have tentatively reached a fair and responsible contract in which all Stop & Shop associates are offered pay increases, eligible associates have continued excellent health coverage and eligible associates have ongoing defined benefit pension benefits,” Ahold Delhaize CEO Frans Muller said in a statement. “I know that both Stop & Shop management and its associates are proud to welcome customers back and look forward to taking care of them every day.”

Terms of the tentative three-year contract weren’t disclosed. The agreement still must be ratified by members of the five UFCW locals.

“Bargaining sessions are no easy task for anyone involved, and I’m proud to see the tenacity and efforts by the parties and FMCS’ mediators pay off with a successful outcome,” stated FMCS Director Nominee Richard Giacolone. “Being able to create a path for workers to get back on the job is great for management and labor, and certainly great for the customers eager to visit Stop & Shop for their grocery needs once again.”