Are suburban consumers ready to give up the familiar grocery experience for bare-bones stores where they have to do their own bagging and leave a quarter deposit for a shopping cart?

That’s what Aldi and other deep-discount chains are betting as they make a big expansion push across the U.S.

Up until now, the German chain and competitors like Lidl and dollar stores have mostly attracted cash-strapped customers. Now they’re moving into wealthier areas as Americans of all stripes get more budget-conscious and their traditional low-to-middle-income niche gets crowded with competitors. Aldi is going even further in appealing to upscale tastes by stocking some fancier goods, such as organic foods.

Bernstein Research analyst Alexia Howard expects discounters to more than double their average annual sales growth to 15% between 2015 and 2020, from 6% over the prior five years. “They seem to have rolled up their sleeves and planned to make inroads with major expansions,” Ms. Howard says.

Still, she warns, the shopping experience may not resonate with Americans and “it might be hard to re-create their European” success.

Indeed, for American shoppers, especially those used to the coziness of suburban stores, Aldi’s stores can be jarring. The outlets feature no-frills décor, skimpy in-store marketing and a limited assortment of foods, more than 90% of which are house-branded.

Aldi, which has about 1,600 locations in the U.S., says the majority of the latest 500 stores it has opened have been in large suburban retail centers in middle-income or higher neighborhoods.

The company takes a number of measures to save on labor costs. The quarter deposits prod shoppers to return carts to the holding bin. Aldi also puts multiple bar codes on its food packaging so that cashiers can more easily and quickly scan them, cutting down on the need for more staffers to handle customer checkout traffic.

Similarly, milk and egg refrigerators have shelves that roll in and out from both the front and back so that employees can restock 80 gallons of milk and 240 dozen eggs in seconds.

If Aldi customers have a question for their local store, they have to drive there. Individual stores don’t take phone calls as a means of keeping costs down and prices low.

The result? Prices can run 25% to 40% lower than traditional grocers.

Customers such as Sam Bridgeland, a 31-year-old consultant from Chicago, like Aldi’s no-frills approach. “I don’t care about the services,” he says.

But Aldi—which opened its first U.S. store in Iowa in 1976—is feeling much more competition in its core market these days. A broader range of retailers are getting into the discount-food business, from Target to dollar stores. 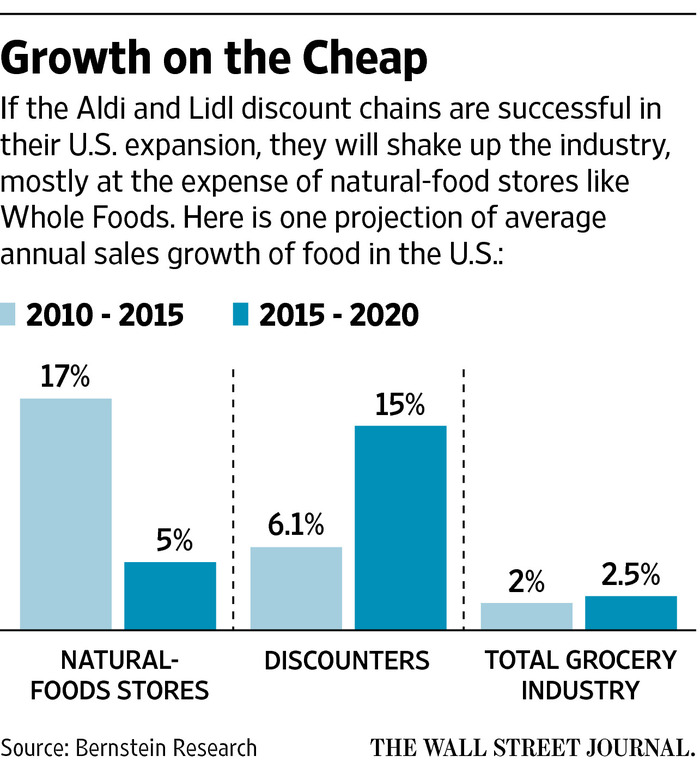 Lidl, another German discounter, has plans to come to the U.S. next year, and has spent more than a decade studying the U.S. market. While Lidl hasn’t confirmed how many stores it will open, it’s building three regional headquarters and distribution centers in Virginia, North Carolina and Maryland, and has plans to open stores along the East Coast from Pennsylvania to Georgia—a region where Aldi operates hundreds of locations.

“Everyone wants to sell groceries,” says Scott Patton, Aldi’s divisional president. “It gets people in stores.”

A move into the suburbs is one way for Aldi to reach new customers. Another is to cater to more upscale tastes. Back in the 1990s, Aldi sold no fresh meat and barely any produce. Now it sells fresh organic ground beef, and as of this year, all of its store-brand foods no longer contain synthetic dyes.

Aldi recently added refrigerated produce for the first time, and it’s so popular it’s causing a backup in the aisle. “Everyone’s stopping there,” Mr. Patton says. “One of the things we’re working on is the turn at the refrigerated section” to alleviate the traffic jams.

The push into the suburbs has caught the attention of grocery executives across the spectrum of stores. Whole Foods Market Inc.,for instance, opened its own discount chain earlier this year, called 365 by Whole Foods, as it felt pressure to lower prices given increased competition.

Natural-food stores, like Whole Foods, will see their average annual sales growth fall to 5% between 2015 and 2020 from 17% over the prior five years, partly because discounters have added more fresh and organic food to their offerings, predicts Ms. Howard.

“We have a tremendous amount of respect for Aldi and Lidl,” Rodney McMullen, chief executive of Kroger Co., recently told investors when asked about the new competition. “There are certain customers that we believe like to shop in that environment.”

In 1998 and 1999, Kroger bought deep-discount grocery chains Food 4 Less and Ruler Foods, which resemble Aldi with their bare-bones style and requirement that customers bag their own groceries. Kroger says its larger scale has helped save money, but it hasn’t been able to make the stores work, finding it difficult to understand and communicate with that “value customer.”

For now, the Aldi formula appears to be resonating with consumers. On a recent visit to a store in Chicago, some shoppers said they were willing to sacrifice luxuries like free grocery carts and plastic bags for cheaper groceries.

“I come for the prices,” said Steve Bryla, a 70-year-old retiree.