Last Thursday morning in the desert town of Scottsdale, Ariz., a tiny robotic car turned onto a neighborhood street and pulled up to a home with a Spanish-tiled roof and synthetic grass in the front yard.

Not even half the size of a Volkswagen Beetle, the toylike vehicle had no driver and no passengers. Instead, it held six bags of groceries from the Fry’s Food Store down the road. One observer oohed and aahed over how cute the car seemed.

Designed by a start-up called Nuro, the vehicle was making a test run as part of a partnership with Fry’s on an autonomous delivery service. Starting this week, Nuro said, two of these small, electric cars will chug along local streets at no faster than 25 miles an hour to deliver groceries to nearby homes.

If it all looked a bit ridiculous, that’s because self-driving is still a technology in search of a purpose. With driverless passenger services from the likes of Waymo, Uber and General Motors slow to become realities, the autonomous industry is casting about for practical uses — and hitting upon experiments like food deliveries from cars that make a golf cart seem spacious.

Other start-ups are now moving self-driving technology off roads altogether and onto sidewalks, avoiding the risks of traffic. (There are regulatory hurdles here, too.) Postmates, a San Francisco delivery start-up, announced plans last week to offer a service that features a robotic shopping cart that runs along sidewalks and has digital eyes that blink every now and again. Still other companies are targeting long-haul trucking, in which driverless vehicles carry cases of beerand other goods, but not passengers.

Nuro’s mini cars are running as part of a partnership with Fry’s Food Store on an autonomous delivery service.Credit Caitlin O’Hara for The New York Times 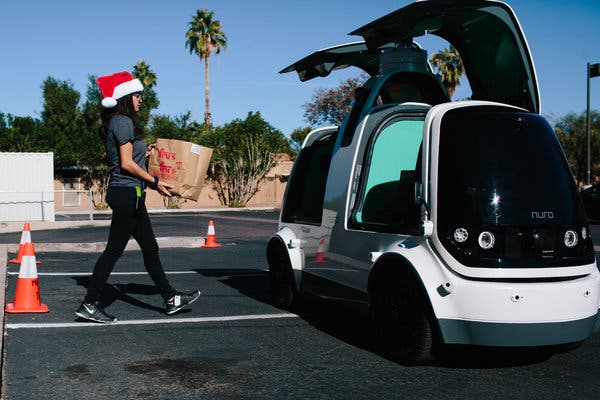 “After maybe biting off more than they could chew, people are concentrating on one particular part of the problem they might be able to actually make money from,” said Tarin Ziyaee, who worked on autonomous technologies at Apple and who recently left Voyage, a company that is bringing self-driving cars to retirement communities.

As a whole, autonomous vehicles are still three to four years from the point where they can make regular trips with no safety drivers, said Don Burnette, chief executive and founder of the driverless trucking company Kodiak Robotics. Autonomous passenger services, he added, are more like seven to 10 years away.

“The more people work on urban self-driving, the more they realize what a long road it is,” he said.

Nuro was founded in 2016 by Dave Ferguson and Jiajun Zhu, two key engineers from Google’s self-driving project, which eventually morphed into the Waymo autonomous business. (Both have the same parent company, Alphabet.) Nuro, which is based in Mountain View, Calif., and has raised $92 million in funding, decided to focus on creating tiny self-driving cars — they measure 104 inches long by 43 inches wide by 70 inches high — that would solely make local deliveries.

Nuro’s autonomous technology was first tested in full-size cars. It is now confident enough in the technology to put its tiny vehicles on public roads.CreditCaitlin O’Hara for The New York Times 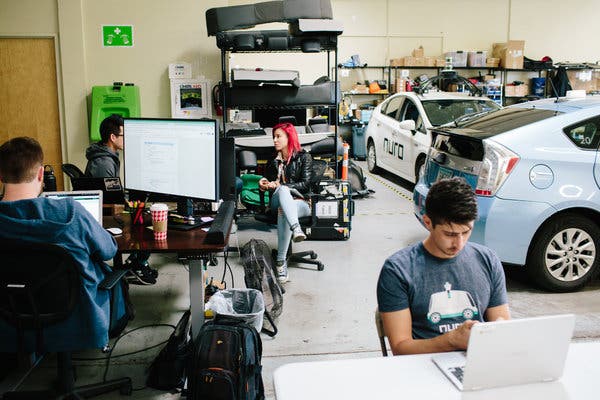 Mr. Ferguson said there was an opportunity to automate all the trips that Americans make to local stores for goods and services — like buying groceries and picking up laundry — citing statistics that these errands account for a significant portion of all car journeys.

“If we can reduce the cost of these deliveries and get them to you faster than you could make the trip yourself,” he said, “there would be no reason for you to get in the car.”

While that endgame is nowhere close to reality, Mr. Ferguson said it was closer than autonomous passenger services. That’s because Nuro does not have to worry about the comfort and safety of anyone in the vehicle. And by making the delivery automobiles much smaller than a regular car, it can also increase the margin of error on the roads.

“There is a qualitative difference when you don’t have to worry about passengers,” he said.

The trouble is that when testing this technology, Nuro cannot put someone in the mini-vehicle who can take over in case of emergency. So the start-up began by tests in full-size cars. It is now confident enough in its technology to put its tiny vehicles on public roads.

Mr. Ferguson, who often refers to Nuro’s mini cars as rolling toasters, acknowledged that the idea can seem “weird.” But, he said, he ultimately sees them as a safer way of getting autonomous technology rolling.

Last Thursday, the Nuro cars looked even odder on second glance — because they were being trailed by regular-size vehicles. A dark Toyota Prius with a small wireless antenna perched on its rooftop was following just behind the self-driving robots. This was what the company calls a shadow car, which ferries technicians who can remotely take control of the robotic vehicle if anything goes wrong.

Nuro declined to discuss its financial arrangement with Fry’s. It said that a delivery today using its mini autonomous vehicles costs $6. Once it removes most of the human labor from deliveries, Mr. Ferguson said, the company can reduce the cost further and eventually serve people that cannot afford deliveries today.

Even so, it was unclear how much demand there would be for the service. Joe Schott, 60, who saw the tiny Nuro car pass his bicycle on a recent afternoon, said it was ideal for his sister, who is disabled. “It’s hard for her to get groceries in and out of her car,” he said.

The tiny autonomous cars are trailed by “shadow cars” in case something goes wrong.CreditCaitlin O’Hara for The New York Times 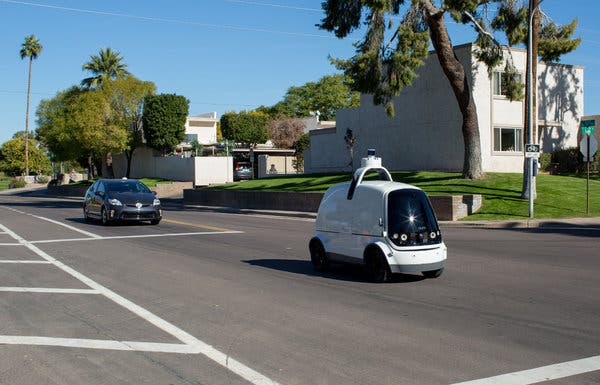 But Keri Diggins, 45, who shops at Fry’s and teaches sociology at a local college, questioned how much the service would suit people who are elderly or physically impaired.

“A car can’t take the food to your doorstep,” she said.

When one of Nuro’s cars pulled up to the curb in Scottsdale last week, I noticed it had small motorcycle rearview mirrors on it, even though the mirrors serve no practical purpose. Federal regulations for low-speed vehicles require the use of rearview mirrors, Mr. Ferguson said.

“It’s easier for us just to put them on than to try to get exemptions,” he said.

To see how well the cars worked, I walked up to the vehicle and punched a PIN code into a small digital touch pad. The doors opened upward, revealing two compartments filled with grocery bags.

It was a moment that showed how difficult it can be to design machines that interact with humans. In creating its robot, Nuro had not provided as much headroom as it should have — and people behave in inexplicable ways.

“We’ll take the blame for the first one,” Mr. Ferguson said with a smile. “The second one is on you.”

In a newer design, he added, the doors will open higher, so tall people will not hit their heads.